This happened last night, within about two to five blocks of my house. A gang of Occupiers / anarchists / thugs vandalized a section of Valencia Street in the Mission District, San Francisco. Here's more from Mission Loc@al:


A group of protesters vandalized dozens of businesses, cars and any property they came across as they marched through the Mission on Monday night. One person was arrested according to Sgt. Daryl Fong but no details about the arrest were made available yet.

The mile-long trek of vandalism began at 18th and Dolores streets, where a group of more than 100 protesters met as part of an early May Day march. The protesters walked east on 18th Street, turned left on Valencia Street, right on Duboce Avenue, and made a right on Mission Street before being confronted by riot police at 14th and Mission, according to Justin Beck, an independent journalist who followed the protesters.

Police dispersed the crowd in the area of 12th and Folsom streets, Fong said.

In a statement released early Tuesday morning, Occupy San Francisco said the vandals were not associated with the movement, but the statement was taken down shortly after. ...

The vandalism began almost immediately after the group took off from Dolores Park at around 9 p.m. The protesters paint-bombed Tartine Bakery on 18th and Guerrero streets. When they reached Farina, one protester grabbed a chair and attempted to break a window but was not successful, said police officer D. Daza. Several of the protesters, dressed in black clothing and with their faces covered, threw sacks filled with paint at the restaurant’s windows, drew anarchist symbols on them and spraypainted “Yuppies out!”

Police confronted the protesters in front of the restaurant and a small group of them dispersed, but the main crew continued along Valencia Street. ...

Read the rest at the link.

The vandals were in a group that marched from Dolores Park shortly after 9 p.m., following a rally in advance of Tuesday's planned Occupy general strike, police said. Traveling down 18th Street and onto Valencia Street, the black-clad, masked protesters smashed windows with crowbars and signs, threw paint on buildings and spray-painted anarchy symbols on the hoods of parked cars. ...

Go read it all. 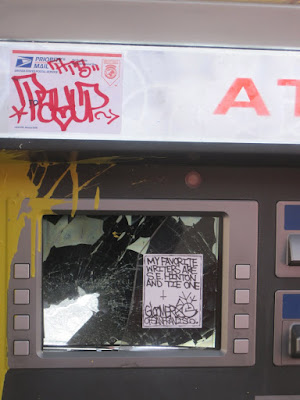 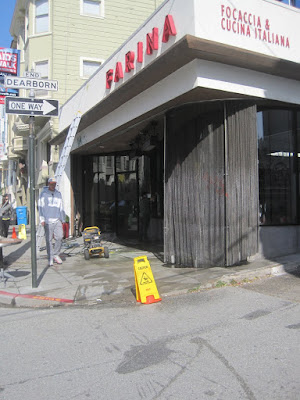 Farina, across the street from the Women's Building (where I go for Friday night services at the Mission Minyan) was hit hard. Graffiti included things like "Yuppies out!" 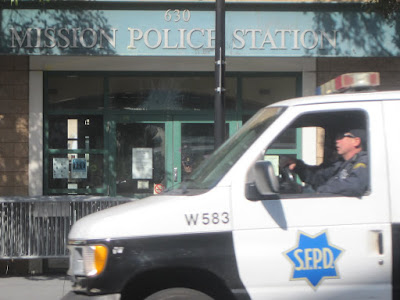 Windows were broken (not visible in this photo) at the Mission District police station. 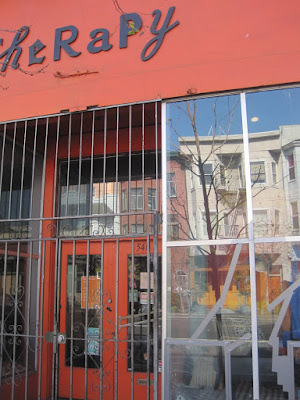 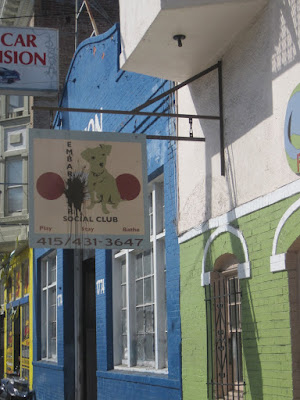 Even this dog boarding service on Mission Street was not spared the paint gun. Die yuppie puppies!

Not pictured here, but the whole front of ArtZone 461 was smashed and defaced. When I walked by there this morning, workers were re-painting the facade, and the glass storefront was boarded up. There were tracks of orange paint on the sidewalk from last night.

I am beyond disgusted.