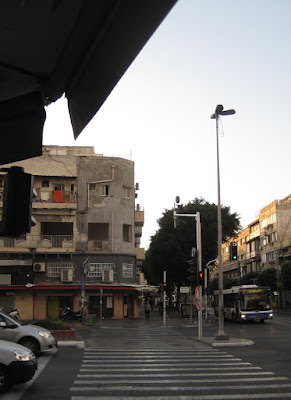 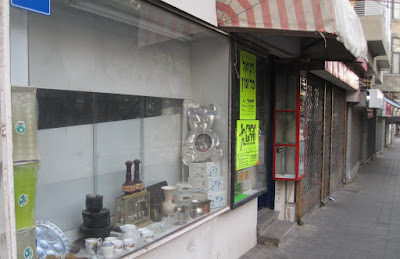 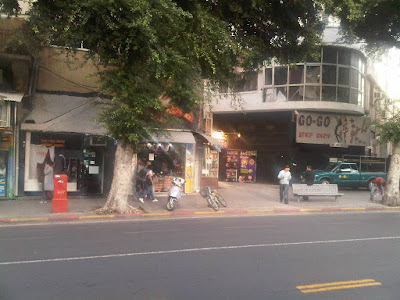 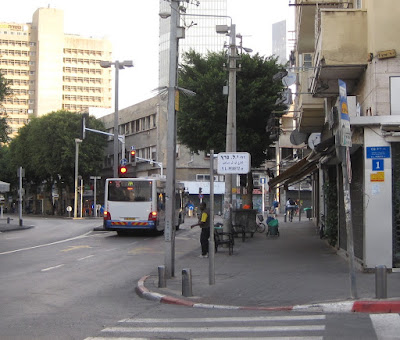 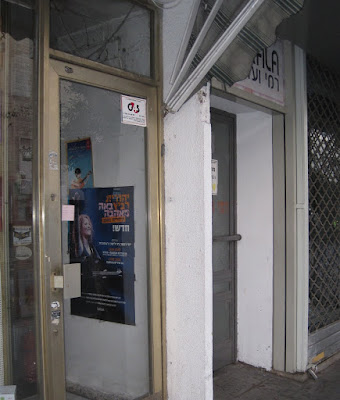 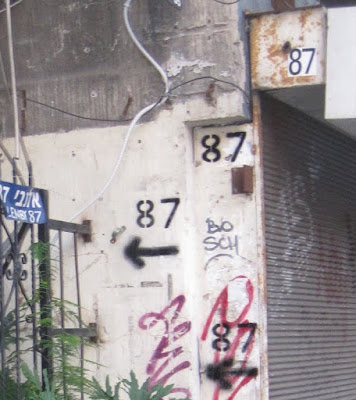 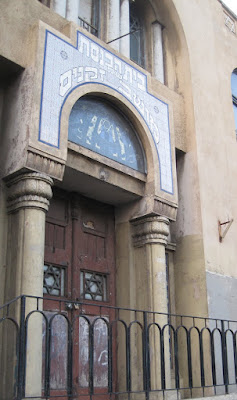 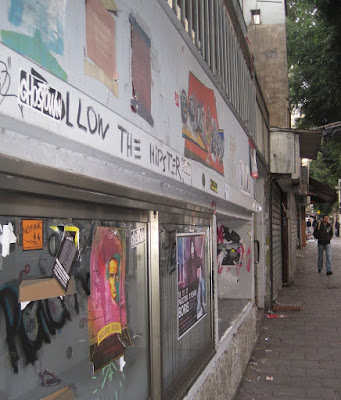 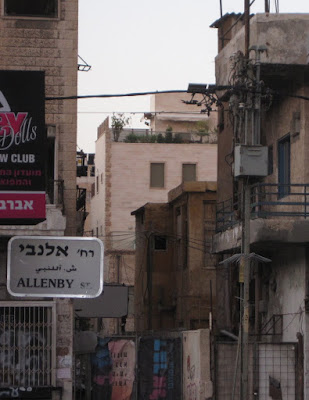 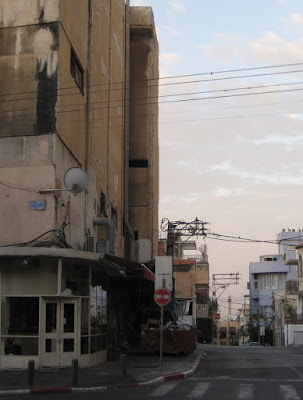 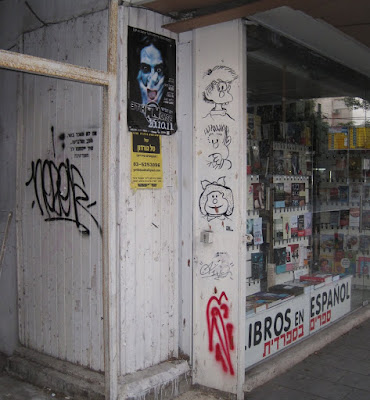 From Tel Aviv to Jerusalem

In Jerusalem, the dominant architectural theme is limestone; in Tel Aviv, it's Bauhaus. If you like Bauhaus, you'll love Tel Aviv.

To get from Tel Aviv to Jerusalem you catch the Egged line 405 bus. Egged's logo is a green Hebrew letter Aleph with wings; you could be forgiven for mistaking it for an X because of the way it's drawn, but it's an Aleph. The 405 leaves Tel Aviv from the Tachana Merkazit (Central Bus Station) at Retsif (platform) 607. It leaves on the hour and every 20 minutes, and takes one hour to complete the trip, give or take depending on traffic.

The bus station in Tel Aviv is in the southern part of the city, at the end of Levinsky Street. I'm told the #4 bus will get you there but I like to walk it. It's about 45 minutes on foot; you go south on Ben Yehuda and Allenby, then take Ha'Aliyah and Levinsky all the way to the end. Beginning from the corner of Bograshov, where the Maxim is, you'll pass posters for nightclubs and flyers for adult services. There are clubs and restaurants (some kosher, most not) and souvenir shops and those Judaica stores I mentioned. As you go south you get into the less touristy and more working-class neigborhoods. There are strip clubs and head shops. You'll pass a lot of derelict storefronts, failed or failing furniture and hardware stores. The population here looks to be mainly African and Russian. Down near Levinsky I see quite a few black hats, almost unknown up around the hotel.

By now I can pride myself on having the backpack check down to an art; I sling the pack over one shoulder and open the top before I get to the security guard, offering a quick "B'seder? Todah!" as I pass, and I'm on my way into the station. I've got a couple of one-shekel coins in my pocket in case I have to pee; the sherutim near the outbound gates are fee, but elsewhere the toilets are pay-to-play.

Pulling out, you pass some run-down cinderblock housing. You'll see graffiti. Here you'll see the cryptic mantra "NA NACH NACHM NACHMAN NACHMAN ME'UMAN", the signature of an ecstatic sect of hasidim, followers of Rabbi Nachman of Breslov. Elsewhere you might see "MARTIN BUBER WAS RIGHT" accompanied by Muslim, Christian, and Jewish religious symbols; it's a riposte to the original, less friendly slogan KAHANE WAS RIGHT. You'll see that one, too. And there are still those persistent posters proclaiming the late Lubavitch Rabbi the Messiah.

We are nothing if not colorful.

You get off at the bus station in Jerusalem and you're on Jaffa Street. Head east on Jaffa and you're on your way to the old city. That's about 30 to 40 minutes on foot. There's a brand-new light rail, too, that goes along Jaffa, but I haven't been on it.

From Tel Aviv to Jerusalem is from one country to another; I'm tempted to say another planet. In Tel Aviv, you might have gotten used to advertising posters with pictures of scantily clad women; in Jerusalem, you'll be hard pressed to find pictures of women in any state of attire. That's a symptom of the growing clout of the haredi (ultra-orthodox) community, and it's been the subject of some controversy lately; more on that later. Men wearing black hats, and women wearing a skirt and a kisuy rosh (head covering) are the rule, not the exception here.
Posted by Asher Abrams at 20:38 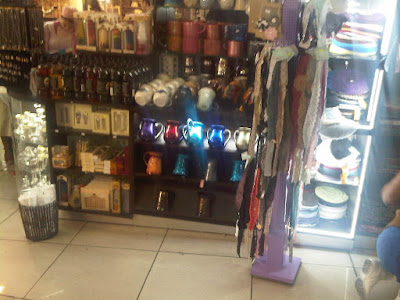 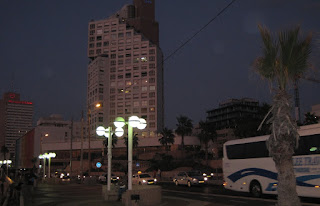 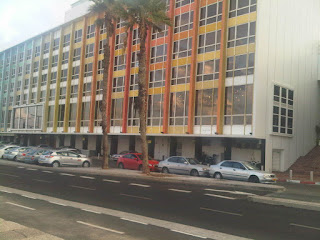 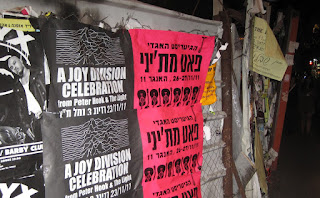 "Lo nidleket," I agreed, in my broken Hebrew. No, the little light wasn't going on.

I'd stupidly forgotten to pack a power adapter for my trip to Israel. It was my first time traveling to Israel - or anywhere outside of the United States - in eighteen years, and I'd been a bit overwhelmed at the prospect; so my packing was somewhat haphazard. But what the heck, I'd thought, I can just pick up an adapter when I get there, right? They get lots of American tourists, they must sell American power adapters. So I'll just pick one up when I get to Tel Aviv.

Easier said than done. The first such device I bought burned out almost as soon as I plugged it into my laptop. I thought replacing the fuse in the adapter might help, but as it turned out the fuse was fine; it was the adapter itself that was fried. (What, I wondered, was the point of the fuse then?) The second device wouldn't even turn on - it was inoperative right out of the box. The third one suffered a fate similar to the first. Finally I shelled out 200 shekels (about $50) for a heavy-duty adapter and was rewarded with reliable service.

Great, I thought, I can use my laptop.

Now if only this nation of Nobel laureates could produce reliable internet service....